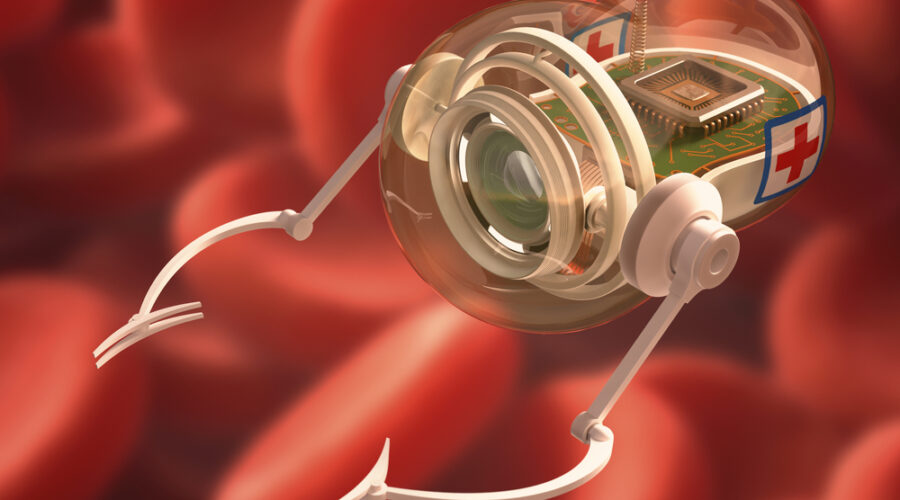 Researchers at the Johannes Gutenberg University Mainz in Germany have developed an implantable biosensor that can measure concentrations of various biomarkers and drugs in the body. Unlike many implantable devices, the sensor can reside in place under the skin for many months without being rejected by the body or losing its functionality. The system uses receptor-studded gold nanoparticles that change color when an analyte of interest binds to them. The researchers can detect this color change non-invasively from outside the body. The technique could lead to long-term biosensing technologies.

Implantable biosensors that reside in situ for extended periods would be very useful for clinical applications, including monitoring drug or biomarker concentrations in the body. However, implanted devices typically provoke a foreign body response, resulting in immune attack and fibrous tissue encapsulation that impair sensor function and viability.

These limitations inspired this latest sensor, which consists of color-stable gold nanoparticles suspended in a polymeric hydrogel. The hydrogel helps to mitigate the chances of immune rejection and acts as an artificial tissue within the body. The nanoparticles are modified with aptamer receptors that are specific for a substance of interest, such as a drug. Interestingly, rather than being impaired by the growth of tissue over and into it, the new sensor requires it to function.

As blood vessels and cells invade the hydrogel, they bring the analytes nearer to the gold nanoparticles suspended within it, allowing aptamer receptors studded on their surface to bind to the analytes. This causes a color change which varies depending on the concentration of the substance present. The researchers can then detect this color change through the skin minimally invasively.

“We are used to colored objects bleaching over time. Gold nanoparticles, however, do not bleach but keep their color permanently. As they can be easily coated with various different receptors, they are an ideal platform for implantable sensors,” said Katharina Kaefer, a researcher involved in the study, via a press release.

The hydrogel construct is tiny. “Our sensor is like an invisible tattoo, not much bigger than a penny and thinner than one millimeter,” said Carsten Soennichsen, another researcher involved in the study. So far, the research team has tested the sensors by implanting them under the skin in hairless rats. These sensors were primed to detect an antibiotic called kanamycin, and were able to do so for a period of several months, with no significant loss in performance.

Looking for medical professionals who can strengthen your organisation with the development of new tools, such as this biosensor? Click HERE!