”My accident and my ceiling lift”

Blog by Jim Ryan, a quadriplegic

As I mentioned in my previous blog, I will talk about my accident, some about my recovery and I will start with the lift my health care workers use to move me from my wheelchair to my bed and back again.

Our lives changed forever on March 30, 2016. My wife, Isabelle, and I were cooling-off in the ocean at Makena State Park on the island of Maui in Hawaii. We are only wading in the water up to our shoulders then working our way back to the beach to dry off and relax. As always, we were walking backwards and keeping our eyes on the ocean. As they say, you never turn your back on the ocean. We were about 10 m from the beach, at a depth that went just past our waists when the last wave approached. I said to Isabelle: “let’s dive through this last wave then head up on the beach”. When the wave arrived, it twisted me around and drove my head in the sand. When I hit the only thought I had was I will have a bad headache tonight. Once the wave passed I was floating face down slightly below the surface. I could see the surface and thought I would swim to it then carry on the day. But nothing moved. I had been instantly paralysed by the wave. 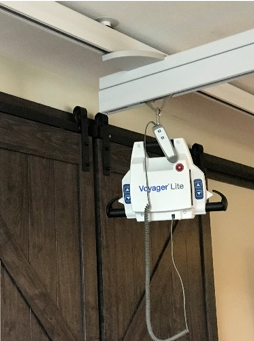 Now, I am lying below the surface, unable to move. It may be my training as an airline pilot to deal with things as they occur that kept me calm. When you are in an airplane and something goes wrong you cannot pullover and try to fix it or wait for a tow truck. You must keep moving forward through time and space and “work the problem”. So, I am floating beneath the surface, unable to move and trying to solve the problem. Then, the air started coming out of my lungs and the water started going in. I could see the bubbles coming out of the left side of my mouth. And the only thing I thought as I was drowning was: “at least I am not burning to death” … The last thing I remember is Isabelle grabbing me out of the water and screaming for help. Then – I died.

Contrary to what the current President of the United States says, America and Americans are great. When Isabelle screamed, everybody on the beach that day jumped into action. Some people ran into the water and helped pull me to shore and started CPR. Some people dialed 911 to get the ambulance to come right away and some people ran to get the lifeguards. The lifeguards took over the CPR and that is what saved me. Through their efforts, I started to come back, and they said to Isabelle: “We think he is coming back. Say something!” And Isabelle, being the romantic that she is, said – and I paraphrase: “This story isn’t over. You owe me 30 more years of marriage!” The lifeguards looked at her and said: “Really?”.

But it worked. I came back. Apparently, I was responding to questions by blinking my eyes. We met the lifeguards who saved me last January, they recounted the story and they felt I was conversing with them that day. But I don’t remember a thing. The lifeguards transported me over the cliffs and the beach to the ambulance then to the hospital in Maui. I spent five days in hospital in Hawaii before being flown to Vancouver on a medical flight home. I spent four months at Vancouver General Hospital (VGH). The majority of the time at VGH was spent getting my lungs and breathing to work. I had a diaphragmatic pacemaker installed. Similar to a heart pacemaker, it taught my diaphragm how to work properly so I could breathe on my own. Again, another story for another time.

After this, I spent five and a half months at the GF Strong Rehabilitation Centre in Vancouver. It was there we learned how to live with me being a quadriplegic. We returned home, to Chilliwack, on January 13, 2017. Our first year at home was difficult as we had to learn even more on how to adapt our house and more importantly, our lives.

A big piece of my equipment is the lift that takes me from my wheelchair to my bed in the evening and back to the wheelchair in the morning. It is an electric lift with the 200 kg lifting capacity. I barely fit in. 😉

The lift is attached to the ceiling with a series of rails that allow it to move forward, backwards and side-to-side. It is called an X–Y lift because it moves in four directions instead of just two. It allows me to move around the room, and not just to my bed but to my exercise mat as well. It allows the healthcare workers to place the wheelchair wherever it is convenient under the lift instead of trying to put it in exactly the right place each time.

I am placed in a sling that fits underneath me and has six loops that hook onto the lift and, like a sack of potatoes with attitude, I am moved back-and-forth.

Without this lift it would be near impossible to move me in and out of my wheelchair. Physically, it would be impossible for Isabelle to move me each day, and the healthcare workers would struggle as well. So, this piece of equipment gives me the freedom I need to get up in the morning and go to bed at night, as well as to my therapy on my exercise mat. 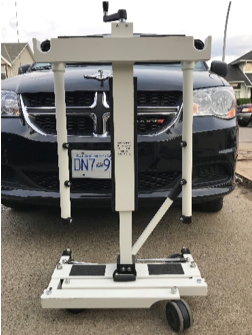 We also have a portable lift that we take with us when we travel. Made by Take along Lifts. This lift allows Isabelle and an assistant to move me when we are travelling. It is also great for getting me in and out of a car. It weighs about 22 kg and is easy to transport. As you can see, it picks me up from in front instead of above, which allows me to get into tighter spaces. Both lifts really require two people to get me in and out of them. Although, in a pinch, one person could do it. But it would be physically trying and tiring.

That’s a brief synopsis of another part of my life. In the next blog I will talk about my wheelchair and its features. I hope you enjoyed this post.