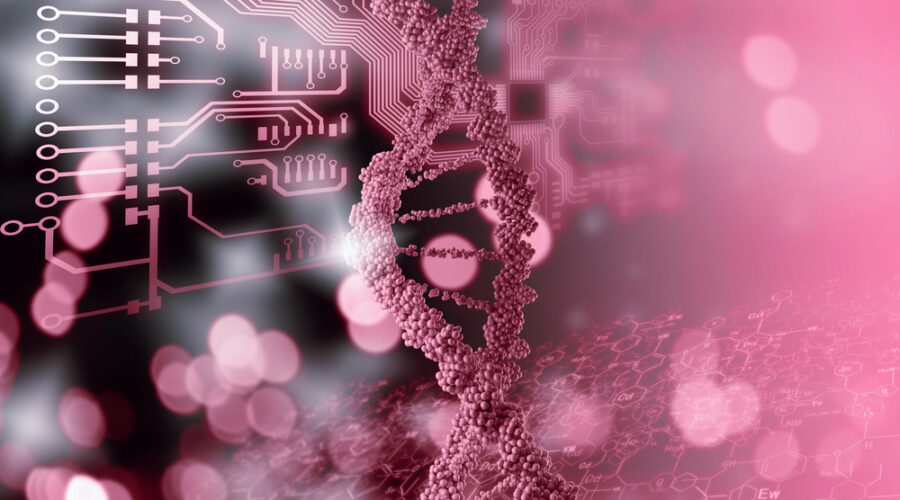 Portable sequencing is making it possible for biologists to perform DNA analysis anywhere in the world. How is this technology reshaping the way they work?

Thanks to nanopore technology, scientists can now collect samples and sequence them anywhere. It is the concept of backpacking applied to scientific research.

French molecular biologist Anne-Lise Ducluzeau has experienced this first hand during her research in the freezing environment of Alaska. “I remember driving back home with my sequencing station on the passenger seat, it was -20ºF (-29ºC) but the car was warm and reads kept coming,” ‪relates Ducluzeau, who has been using a portable sequencer for her research for the past four years.

“The fun I felt and the new possibilities offered by the technology made it quite clear to me that it was also the way I could transmit knowledge and passion.”

During her very first workshop using portable sequencing devices, aboard a research ship in the Bering Sea, Ducluzeau unexpectedly confronted the collateral effects of a typhoon. “The idea was to bring 12 undergraduate students to perform real-time analysis of DNA samples for the description of the marine landscape, when we started to sail the tail of the Trami typhoon. The storm had totally disturbed the natural stratification of the water column and students picked up on that,” she recalls. “This raised the challenge to another level.”

Mobile genetics labs are changing the workflow of field researchers. “It has literally reshaped my research since I discovered it in 2016,” Ducluzeau notes. The device she uses, called MinION, had shown up in the market two years before. Since then, the number of field research studies using this technology have been increasing each year.

The MinION is smaller than a smartphone and can perform DNA sequencing in real-time anywhere. The technology consists of making a DNA strand cross a membrane through proteins called nanopores that open a passage just big enough for DNA molecules to get through. A current is passed through the nanopore so that, as the DNA strand passes through, the current is disrupted. Each of the four building blocks that make up DNA affect the current differently, allowing their identification.

Oxford Nanopore Technologies, the company behind the MinION, has been gaining ground in the worldwide sequencing market against giants such as Illumina. The UK-based company attracts researchers by offering portable sequencing starting as cheap as $1,000 — about €860.

With these new tools, the genomes of any living thing are within reach of any curious hands. The technology allows scientists to take their lab directly to the natural world, something that is more relevant than ever in a time of accelerating biodiversity loss.

Few habitats in the world symbolize the magnificent biodiversity of nature more than the forests of Madagascar. Unfortunately, Madagascar is suffering from rapid deforestation. Marina Blanco, an Argentinian scientist at the Duke Lemur Center in North Carolina, has been conducting research in the country since 2004, mostly studying mouse and dwarf lemurs in the eastern rainforests.

“Our work with the mobile lab started in 2018, when we deployed the lab in the Anjajavy forest.” Marina and her colleagues successfully extracted and sequenced DNA from these lemurs that allowed them to confirm the presence of certain lemur species in the forest.

“We combined all the methodological pieces — trapping, sampling, analysis, sequencing — in a single research protocol at our field site. This means that field and lab research can actually be performed by the same person. This has allowed us to answer a question in a couple of days rather than waiting for months or years.”

On-site sequencing could also save precious time in life-or-death situations, such as identifying disease-causing microbes. Within just a few hours, a group of researchers led by the American computational biologist Laura Boykin are able to determine what viruses infect the crops on African farms, and alert their owners. “This technology has changed everything for us. We were on the path to building stationary labs, but pivoted when we realized all of those expensive pieces of equipment can be mobilized to the farmers,” Boykin told me.

Her research team uses the MinION to identify viruses that destroy cassava crops. “These farms are surrounded by beautiful forests, but the vegetation surrounding the farms could be a potential source for pathogens. We are using portable sequencing to identify them before they cause major yield losses.”

Identifying these viruses can be a major step in food security and increase the income of farmers across the planet. Boykin can communicate the results to the farmer on the same day, meaning the locals can take immediate action. During an intervention in Tanzania, her team identified the specific strain of virus infecting cassava crops. This allowed locals to plant a variety that is resistant to that viral strain, increasing their yield from zero to 30 tonnes per hectare.

Portable DNA sequencing can also be performed in inhospitable places on Earth, where life needs to find alternative ways to adapt to harsh conditions such as a lack of nutrients, light, or oxygen. While studying these extremophile organisms can be hugely beneficial for applications ranging from anti-aging to crop health, reaching and analyzing them can be a challenge.

Menno Schilthuizen, a professor at Leiden University, faced this challenge when studying a beetle that only lives in the caves found in Montenegro. “Our team hiked high up the mountain to reach the cave entrance and crawled through narrow passages with the portable DNA lab. We were able to extract and sequence the DNA of the cave beetle Anthroherpon zariquieyi within a few hours in a totally hostile environment,” he told me “It was so cold! Try managing a pipette or the spill-free loading of a gel at such a temperature. And of course, nothing is flat. It’s quite hard to find a slab of rock level enough to serve as a makeshift lab bench.”

A key advantage of portable sequencing for Schilthuizen and his team is that it allows them to circumvent the complex regulations around the export of biological samples across borders. This can save months of waiting. “In the past we needed to apply for export permits if we wanted to do DNA work. Now, we can do this directly in the field, so the samples can be deposited in the local natural history collection before we leave the country. This simplifies things a lot.”

More adventurous scientists are using these devices in other remote places across the Earth, such as Ineke Knot, researcher at the University of Amsterdam, working in Indonesia to protect great apes from human infections, or the English bioengineer Glen Gowers and his team, who accomplished more than 24 hours of continuous DNA sequencing during an expedition on Europe’s largest icecap, the Vatnajökull in Iceland.

While portable sequencing has been a massive improvement for many biology researchers worldwide, it still has limitations. Working in the heart of nature means that a wireless connection will frequently not be available when you need to send several gigabytes of data to the cloud. The equipment can also get overheated, and there may be power restrictions making it impossible to perform DNA sequencing in the field.

So there is still significant room for improvement. “Scientifically, we need everything about the process to be easier. No pipettes, no Unix command lines, all of it needs to be streamlined,” Boykin emphasized.

A balance between robustness and simplicity in the equipment would be the key to exploit the full potential of sequencing in the field. “Reagents should tolerate significant temperature variations, and remain functional for several days. And transportation under extreme environmental conditions, though common in the field, currently makes the process vulnerable,” added Blanco.

The accuracy of portable sequencing has been a concern since its beginnings, although it has been improving over the years. ”I think the accuracy is sufficient to create biodiversity databases, and we definitely need to feed databases,” said Duzucleau. “Let’s go in countries with rich but threatened biodiversity, with no access to DNA sequencing, and let’s make it happen.”

Sequencing DNA is often only the first step of a research project. To answer a particular question, researchers also need analytical tools. At the moment, most of the software developed for the interpretation of nanopore sequencing data requires high coding skills, which most biologists lack. “Until today, we are still using custom-built scripts to translate nanopore reads into reliable DNA barcodes of a quality that is suitable for species identification,” Schilthuizen said. “This process still needs a lot of simplification and standardization”.

An increasing number of algorithms and tools are being developed, but there is still a long way to go. “Bioinformatics should also rely on offline pipelines to be effective in conditions where internet is not available,” said Blanco. At the moment, weak internet connections can be one of the main bottlenecks for real-time analysis in remote areas, but there is as yet no software that can work offline.

The future of portable sequencing

As portable sequencing has gained popularity among scientists, a number of companies have sprung up in recent years to further advance its applications. In the UK, the startup Bento Lab sells portable DNA labs using nanopore sequencing technology as an education tool. Over in Canada, the company WildTechDNA is using the technology to stop the traffic of illegal wildlife. In Italy, the firm WonderGene provides portable sequencing equipment for a wide range of applications including food quality control and detection of microplastics pollution.

In the midst of a worldwide pandemic, nanopore sequencing has also proven a useful tool to test for Covid-19, with results ready within little more than an hour.

Meanwhile, in the microgravity of the ISS, the NASA astronaut and biologist Kate Rubins sequenced DNA in space for the first time in 2016. In space, portable sequencing could support biotechnology applications such as growing food, producing oxygen and water, and keeping astronauts healthy. It could even become a handy life detection instrument for future space flight missions.

Oxford Nanopore Technologies keeps working on improvements and new features, such as a device that can be integrated into a smartphone, with the consumer market on the horizon. These advances will bring biology research closer to the public than it has ever been before. “From high school to college students, or volunteers interested in science and conservation, these devices can help emerging scientists in low-income countries to conduct their research programs and pursue their interests,” Blanco remarked.

Mobile labs could empower communities to take part in environmental initiatives. Some of these initiatives let tourists participate in research expeditions, letting them directly engage with the natural habitats of their destination. “Most participants are blown away by the simplicity of the technique and the fact that it democratizes taxonomy,” said Schilthuizen. “I think it is only a matter of years before handheld DNA-based identification tools are available to the general public.”

However, making the technology available to the whole society will still require further technological advances. “I can see the general public using a user-friendly portable DNA sequencer for very specific questions for which the bioinformatic workflow will have been very much streamlined,” Ducluzeau explained. “It remains necessary to train people, it’s not exactly plug-and-play yet.”

Maybe a futuristic society of omnipresent genomics is not that far, and tiny sequencers and labs will be integrated everywhere, delivering genomic data at any moment we desire. “I’d like to see every area utilizing these devices,” said Boykin. “I do see the public using them in the near future. That will make for very interesting data privacy issues though.”