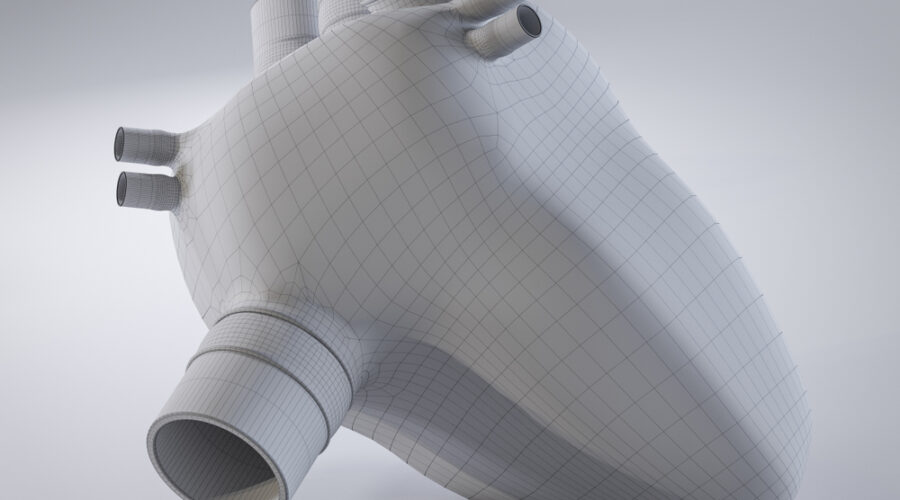 Scientists at the Royal College of Surgeons in Ireland and partners at the National College of Art and Design in Dublin have developed a silicone heart model that is intended to model heart failure with preserved ejection fraction. The device, which represents a ‘mock circulatory loop’, includes a simulated version of the left atrium and left ventricle, and each chamber is independently controlled to model the entire cardiac cycle. The researchers use air pressure in a surrounding chamber to induce the device to pump, in much the same way that our diaphragm controls breathing by changing the air pressure in our thoracic cavity. The researchers hope their model will be useful in testing different tools that are intended to treat heart failure, such as mechanical assist devices.

Heart failure is on the rise, particularly in developing countries, and it is important to develop new treatments for this patient population. Part of this is developing new ways to test therapeutic interventions, including new medical devices. Researchers have tried removing hearts from experimental animals and attempted to keep them beating as long as possible in the hope of testing new treatments. But once removed from the body such organs decline very quickly, limiting their usefulness.

It is also important to accurately model the type of heart failure that you wish to treat. In approximately half of heart failure cases, left ventricular ejection fraction, a measurement of the proportion of blood in the ventricle that is ejected each time it beats, is largely preserved and remains at or over 50%. Modelling these nuances with an ex-vivo heart that has been removed from a pig is challenging. Consequently, researchers have turned to synthetic heart models, and this latest one makes a leap by modelling both the left ventricle and left atrium.

“Half of the patients presenting with heart failure have heart failure with preserved ejection fraction and the numbers are increasing in the developed world in particular due to the increase in the prevalence of risk factors,” said Aamir Hameed, a researcher involved in the study. “The condition can be difficult to treat with medicines and is causing a considerable burden to health services throughout the world. The development of this lab-based model is a milestone in heart failure research as it enables devices to be tested that have the potential to treat a condition that affects millions of people around the world, improving their quality of life and reducing the burden on health services.”

The device can model healthy cardiac function and by limiting diastolic relaxation and filling, it can also model Heart Failure with Preserved Ejection Fraction. As interventions to treat this type of heart failure will likely need to target both atrium and ventricle, the technology represents an excellent platform to test new therapeutic interventions.

“Until now, no lab model had been developed that could both mimic the cardiac cycle and features two independently controlled cardiac chambers to fully simulate the blood flow of the left atrium and the left ventricle during the resting phase of the cardiac cycle,” said Andrew Malone, another researcher involved in the study. “This is a key step forward in the development of a robust means of testing heart failure device treatments.”

The development of this device helps patients with heart failure that is especially needed in developing countries. Are you looking for experts for your MedicalDevices organisation that have the necessary qualifications and a keen interest in the Life Science sector? QTC Recruitment offers a wide range of services for hiring Life Science professionals. Check out the link to learn more about how we operate and how we can help you here!