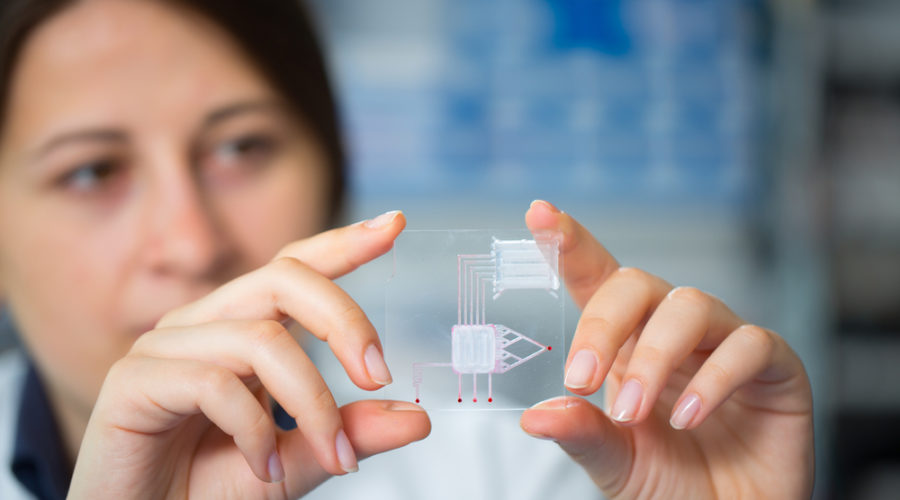 Researchers at EPFL and the University of Bern have developed a groundbreaking method for studying the electrical signals of cardiac muscle cells. The technology has numerous potential applications in basic and applied research – such as improving the search for mechanisms underlying cardiac arrhythmias.

Cells are the smallest living units in the human body. Excitable cells such as neurons and cardiac muscle cells – cardiomyocytes – use electrical signals, so-called action potentials, to communicate with each other. Scientists study these signals underlying normal brain and heart function using electrodes placed either outside or inside the cell membrane, methods known as extracellular and intracellular recording.

Researchers at EPFL’s Microsystems Laboratory 4 (LMIS4), led by Philippe Renaud, and the Laboratory of Cellular Optics II of the University of Bern, headed by Stephan Rohr, have teamed up to develop a new microelectrode that penetrates the cell membrane unassisted and, when placed in an array, allows scientists to follow electrical activity as it spreads through tissues. The findings of the researchers have been published in Nano Letters.

While recording systems of cellular electrical activity have evolved markedly over the years, they still have limitations. Non-invasive extracellular multielectrode arrays which use electrodes placed outside the membrane report signals that are only indirectly related to the action potentials. They tell scientists little about the actual shape of the action potential – a transient rise in the cells’ membrane potential – which causes the heart to beat, for example.

Since cellular action potentials were first measured by Silvio Weidmann from the University of Bern’s Department of Physiology seven decades ago, scientists have been measuring these signals by gaining intracellular access with microelectrodes. These electrodes can be impaled into the cells, or they can be placed onto the cell membrane, after which the membrane is opened under the mouth of the electrode. This can be done either mechanically or by electroporation – the application of high voltage pulses to the electrode. The latter technique was recently used to gain intracellular access by nanostructured electrodes in the shape of microscopic mushrooms, for example. However, this methodology is not ideal because the interface between the cell membrane and the nanostructure is unstable, leaving only a brief window – typically a few seconds or minutes at most – for scientists to record action potentials from cells.

The EPFL and University of Bern team took the best features of existing technologies and came up with an ingenious volcano-shaped design to get around this problem. “By reworking the geometry and materials, we developed an electrode that penetrates the cell membrane unassisted, thus eliminating the need for electroporation,” says Benoît Desbiolles, a doctoral assistant at LMIS4 and lead author of the publication. “We also drew on previous research by our lab, which shows that mimicking the cell membrane stabilizes the cell-electrode interface.”

The new type of electrode, coined as a nanovolcano, consists of three parts. The first is the rim of the crater. It consists of a gold ring having the same size and being lined with the same biomolecules as the cell membrane itself. Inside the crater sits a platinum electrode used for picking up the electrical signals. The outside is surrounded by insulating glass. “Once you place a cell on the structure and it starts to bed down, the sharp edges pierce the membrane and the electrode penetrates the cell,” explains Desbiolles. “Instead of reforming, the membrane anchors itself to the gold ring, creating the ideal conditions to record the cell’s electrical activity.”

Using nanovolcano arrays, scientists can measure action potentials at multiple locations in a cell culture simultaneously, providing a wealth of insights into how cardiac muscle cells interact in space.

“For electrophysiologists like me, this technology is something of a dream come true,” says Stephan Rohr, who co-authored the publication. “As well as measuring the action potential of individual cells, we can now study how propagating action potentials change their shape depending on the tissue structure and pathological conditions. That knowledge is vital for a deeper understanding of the mechanisms leading to potentially fatal cardiac arrhythmias.”

Nanovolcanoes have potential applications well beyond cardiac electrophysiology. “Aside from its groundbreaking design, our electrode is also extremely easy to make,” explains Desbiolles. Tests are currently being run to see whether it works equally well with neurons and other excitable cell types. According to the young researcher, the design holds promise for other scientific disciplines, too: “Nanovolcanoes open a door into the cell. You could conceivably perform electrochemistry inside.” The technology might also appeal to the pharmaceutical industry, allowing scientists to test how cells react to drugs and, in the long run, develop targeted therapies.

Published by Actu.epfl.ch on September 04, 2019
Image from Shutterstock