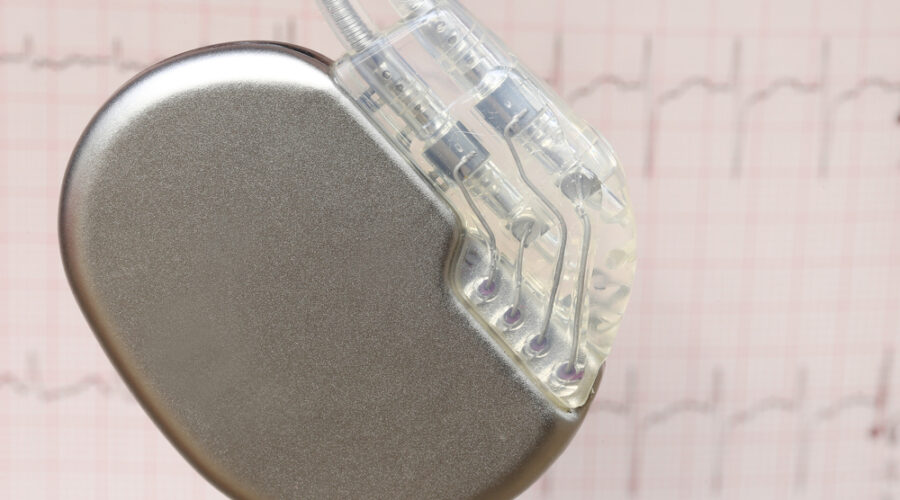 Magnetic interference with pacemakers and implantable cardioverter defibrillators (ICDs) has been well-documented for several years now. Patients are advised not to linger too long near security alarms in shops or wear clothing with magnetic fasteners over the chest, should this cause interfere with the devices inside them. While these circumstances are fairly easy to avoid, modern technology has brought in a new magnetic threat to pacemaker users: Qi charging.

Wireless Qi charging works by transferring energy from a charger into a receiver in the back of a device, such as a mobile phone or smartwatch, via electromagnetic induction. An induction coil inside the charger creates an alternating electromagnetic field, which a receiver coil in the device converts into electricity to charge its battery.

Apple has now released a list of its products that could potentially interfere with a pacemaker or ICD – including the iPhone 12, Apple Watch and Mac laptops – and the US Food and Drug Administration (FDA) has issued a public health warning about the risk of magnets in consumer products to pacemaker and defibrillator users. While this risk is still considered small, it’s not non-existent.

British Heart Foundation senior cardiac nurse Julie Ward says: “It is considered safe to use a smartphone if you have been fitted with a pacemaker as long as it is kept 15cm (6 inches) away from your chest. Always use the ear on the opposite side to your pacemaker, and don’t put the phone in a shirt pocket over your pacemaker. Apple recommends that the iPhone 12 be kept 6 inches away or 12 inches away from a pacemaker device when wirelessly charging.”

How do magnets impact cardiac devices?

Henry Ford Heart & Vascular Institute cardiologist Dr Gurjit Singh says: “A pacemaker is a device used to pace the heart when people have slow heart rhythms. An ICD is a device which does the same job as a pacemaker but can also save a life by terminating fast deadly rhythms known as ventricular tachycardia and ventricular fibrillation by delivering an electric shock to the heart.”

Since it wouldn’t be practical to perform surgery every time a cardiac device needs adjusting, pacemakers and ICDs have switches inside that respond to external magnets and change how they function.

Singh and his colleagues began to wonder if the magnet inside the iPhone 12 would affect the operation of the devices. To investigate their suspicions, they took an iPhone 12 Pro and passed it over the chest of a patient with an ICD.

The researchers found that the device was deactivated when in close proximity to the iPhone 12, monitoring its activity using an external defibrillator programmer. The device immediately returned to normal functioning when the iPhone was taken away.

Singh says: “It turns out that pacemakers and defibrillators are designed so that any magnet above the strength of ten gauss – a unit of magnetism – can activate the switches in these devices. The bench testing that I did on my phone found a magnetism of about 400 gauss – 40 times the limit.”

Singh and his team are now carrying out a large-scale formal study, assessing the impact of both the iPhone 12 Pro and Apple Watch on implanted cardiac devices from a number of different manufacturers, including Medtronic, Boston Scientific and Biotronik.

What does this mean for the industry?

As wireless Qi charging becomes increasingly popular, it’s hard to say what impact this could have on implanted cardiac devices. It may well mean that in the future they will need to be designed differently and the magnetic element will have to be reworked.

Singh says: “I’m not aware of any third-party company that can do anything, I think it’s something that has to be done by the device company itself. Their engineering has to change. Maybe the switch will have to be something totally different, not even magnetic, or only be activated by bringing the magnet to the chest in a specific fashion to make it more tough for the device to react. Maybe we should raise the magnetic threshold, so the magnet has to be stronger to be switched on and off.”

However, even if future pacemakers and ICDs implement a novel design that removes the risk of magnetic interference from everyday technology, there will still be millions of people around the world fitted with devices that can still be affected.

“Even if you come up with a new device or a new technique, what happens to all those legacy patients?” says Singh. “You can also argue that Apple knew this, how did they get through getting certified? But I don’t think Apple is going to change this.”

It’s worth remembering that the risk to the health of pacemaker and ICD users from magnetic smart devices is still considered very minor. So far, there are no known fatalities that have resulted from an iPhone interacting with an implanted cardiac device – but it’s not impossible, and the risk increases as more and more devices are fitted with large, powerful magnets.

Singh says: “Let’s assume you have a high-risk patient with a defibrillator and he’s laying back with the phone in his shirt pocket and goes into a deadly rhythm and needs the defibrillator to shock him, but his iPhone is sitting there, stopping that from happening. It’s a lot of ‘ifs’ before that point, but we have seven billion people on the face of the planet so the chance of that happening is definitely there.”

Do you want to contribute to the development of innovative devices and technologies such as the pacemaker? See how we can help you here!